Being a big fan of my Avatto S06 IR remotes I came across this sales page on Aliexpress, which gives a nice list and comparison chart of the variations of the SXX remotes.

For myself the S11 (IR and RF 433 combined) would be the most interesting device, but for others the included temperature and humidity sensors plus the optional LCD display might have additional value.

While the internal climate sensors would probably need OMG adaption, the S11 could actually be IR/RF build compatible.

Does anyone have any experience with any of these devices yet, and what would be the general interest in them?

P.S.: S11 ordered and on its way for testing

So today my S11 arrived and I opened it straight away

alas, it doesn’t look like it’s easy or even possible at all to get OMG installed on it.

Following are some pictures, if anyone else can deduct any further info 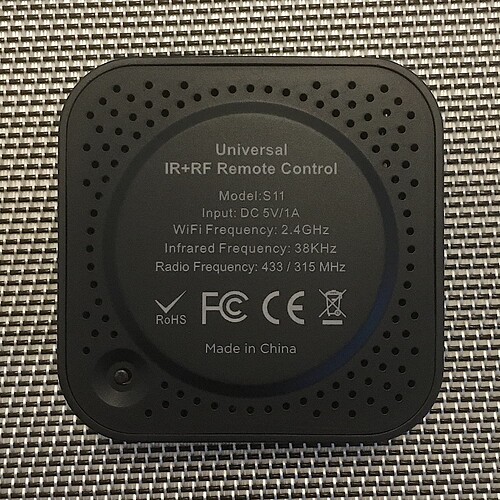 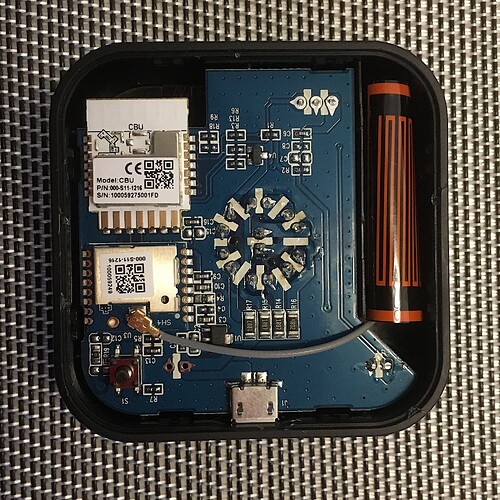 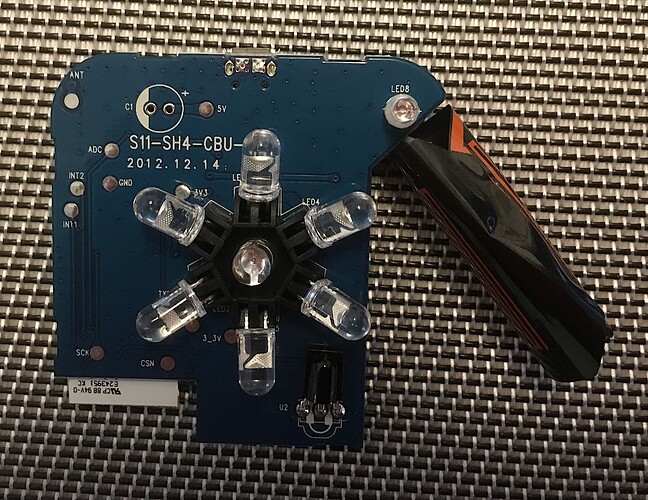 Only found this information so far on the Tuya Dev pages

CBU is a low-power embedded Wi-Fi module that Tuya has developed. It consis......

CBU-IPEX is a low-power embedded Wi-Fi module that Tuya has developed. It c......

I’m wondering now if a similar IR/RF model, as in

might use the same innards, just with a slightly different case, or possibly be more OMGable?!?

So stuck with separate IR and RF gateways for now.

Thanks for sharing this!

Hi. I have the very same model. Did you got any progress?

After my above posting with the links to the Tuya CBU (Custom Built Unit) module data sheets, along with the custom Tuya SH4 433Mhz radio module

I set aside the project for the time being.

I believe it might not be possible at all, or at least more complex, for OMG to support such a custom module set up.

but I have also ordered some SMD Grippers for any eventual further fiddling with the S11 in the future, as I don’t generally like having any cloud connected devices in my set up.

I’ll include my findings here, to maybe help someone who is more skilled than me.

I came across this repository on github OpenBK7231N.
It looks like a plain fork, but checking the author’s page, I found some interesting links.
One of them details how he/she managed to create, upload and run a custom firmware (Tasmota like).

I believe it might have some hints and useful information, to try something similar with OpenMQTTGateway.

*I can share the links, if it complies with the community guidelines.

While I found some OpenBK7231N repositories, but didn’t see anything related to the S11.

If you could share what you have found in this regard that would be great.

I got the chip model (BK7231N) from the CBU module datasheet that you shared.
Considering that S06 uses ESP8266 and S11 BK7231N, my assumption is (correct me if I’m wrong) that we need a different firmware/process.

Yes, I think the same, but didn’t you say that you also found a link where someone succeeded in flashing a Tasmota(-like) onto the S11? Maybe that could bring more light into the BK7231N and how to possibly allow for some future OMG flashing.

I think this belongs here too.
I ordered a Tuya S06 from Aliexpress and it isn’t based on ESP8266, so current OpenMQTTGateway prebuilds don’t work on it.
The board layout has changed slightly (see images).
So, be aware, that if you are buying S06 for to use them with OpenMQTTGateway, there currently is a new version that doesn’t work with OMG. 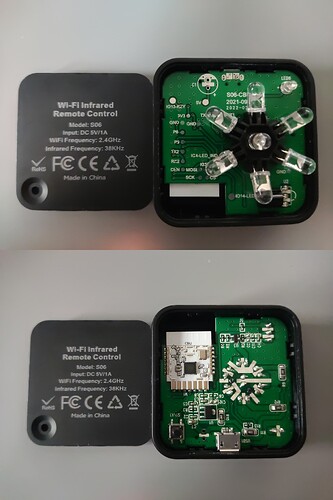 The setup of the device happens using the “Smart Life” App by selecting “Universal Remote Control (Wi-Fi+BLE)” under “Others”.
It actually uses BLE for setup. The device doesn’t set up it’s own WiFi network out of the box.

So… Technically this thing could act as a IR and BLE gateway, having the potential of being compatible to BLE-MESH, mesh2MQTT or the new Matter-standard.

I’ve also been able to use the Tuya integration to make learned IR-Devices show up in Homeassistant. Well… they show up, but aren’t nicely controllable through HA.

Sadly there isn’t IR-Gateway firmware for this device yet. Just my luck…

The Tasmota firmware has MQTT-support, but doesn’t have the IR libraries.

I ordered a Tuya S06 from Aliexpress and it isn’t based on ESP8266, so current OpenMQTTGateway prebuilds don’t work on it.

Oh what a shame, that they now also use their CBUs in the S06, which I thought was the best OMG compatible IR blaster around

I’m wondering if this has to do with it being sold as Tuya compatible, as the Avatto/Bakeey versions never stated that, and current non-Tuya-mentioning S06 might still be the old OMG compatible versions.

@Anaeijon From your name I think you could be from a German speaking country, so the not too expensive Pearl auvisio version might be worth a try for you, if interested.

Thanks for letting us know about this unfortunate find.

@1technophile, might be something to add to your S06 blog entry.

Thanks for the hint about buying one from Pearl. Yes, I’m German.
I was already searching for an other variant, that is not Tuya-compatible.

I see it as an chance, because the BK7231N technically is quite a nice chip with additional BLE, that just hasn’t much support yet.
Although, if we get Arduino compatibility for it, the S11 and S09 would probably be far better deals than the S06V1.2

Anyway, yes, there should be a warning added, not to buy one with Tuya support / Bluetooth Setup.

Thanks for the hint about buying one from Pearl. Yes, I’m German.

Either directly or in double pack from German Amazon, but please remember, this is only my hypothesis that they are not also already the Tuya BCU versions! 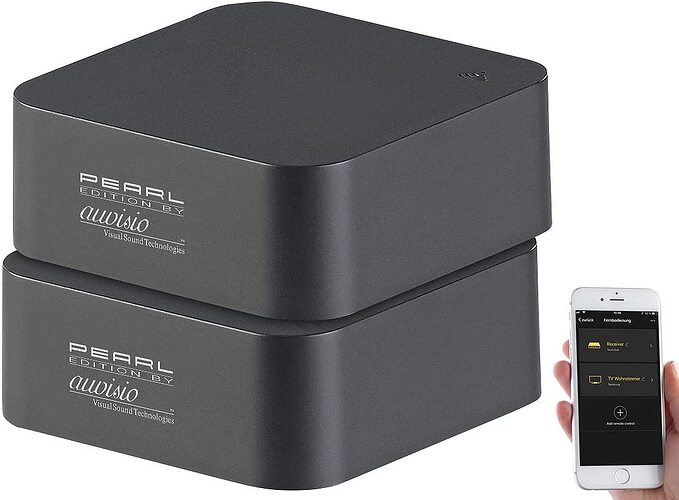 Although, if we get Arduino compatibility for it, the S11 and S09 would probably be far better deals than the S06V1.2

Absolutely and my S11 is still ready and waiting for that time.

From the comments on Amazon, as recent as April 2022, people are also talking about flashing these auvisio S06 versions, so could very well confirm the non-Tuya hypothesis.

Thanks again for the help, but I’m not longer going to buy and use an S06.

I really don’t like having to set up some pogo pins or soldering a wire to the flat exposed terminal. There are technically easier options.

I’ve ordered an ESP32-C3, a Lolin IR shield and a compatible breakout board instead from lolin.aliexpress.com .
In total it’s still cheaper (about 10€) and I know exactly what I’m getting.

That way I get an ESP32 with much more power than an ESP8266. It has a built in programmer and build in BLE. Using the breakout board I can easily add SRX882+STX882 later. I need to solder anyway, but that way soldering is much easier. I can flash/reprogram it via USB and don’t need an FTDI vor TTL adapter.
I can easily tinker around with it and also build a multi-gateway.

Shure, I will probably need to configure and compile the project myself, but it doesn’t seem to hard.

Shure, that stack oft boards won’t have a nice enclosure, but over all it seems slightly more ‘off-the-shelf’ than hacking an S06. I can always print a case or use some slightly transparent container.

With the additional risk of getting the wrong hardware, the S06 became a lot more unattractive compared to other options.

I can fully understand you frustration when you received the wrong S06, currently not compatible with OMG.

For me it was the other way round, where I initially built a self-made IR gateway, admittedly not using the Lolin IR shield, but just a single IR emitter LED. I was so disappointed by the range and it only working if directly in the line of sight of a (closeby) receiving IR device, that when I came across the S06 blog entry I ordered one and since have been such a big fan for IR OMG controlling that I ordered 5 more.

The fact that the S06 even works around corners by bouncing of my white walls and ceiling is just impressive to me, hence the extra 5 for myself and friends ;). In one of my rooms 3 devices work reliably without any direct line of sight. I hope you have a similar experience with the Lolin IR shield with its four emitter LEDs.

Knowing how fiddly it was to solder the delicate contacts on the PCB on the first one I 3D-printed a DuPont cable holder for all other 5 S06 and quickly got the initial install of OMG on all of them with no soldering at all.

Using paltformio for all my gateways, all future OMG updates are done Over The Air anyway, as I don’t see any need in getting any gateway from a top shelf or wherever it is when I can update all gateways within minutes over the WiFi network from my PC.

For anyone else still interested in the S06, and in a German speaking country or EU shipping range, I found this interesting note on the Tasmota site, regarding the auvisio S06 IR Controller with clear model/order numbers 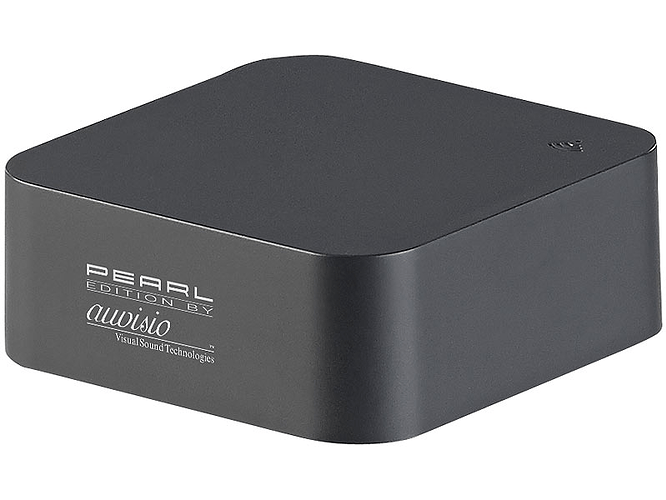 with them having the same compatible or not issue as OMG it’s stated clearly which version works, and which to avoid.

I think things are getting rolling with these now … FYI