Here is a third ESP32 packaged board so as to enable easy presence detection and retrieve Xiaomi sensors data. 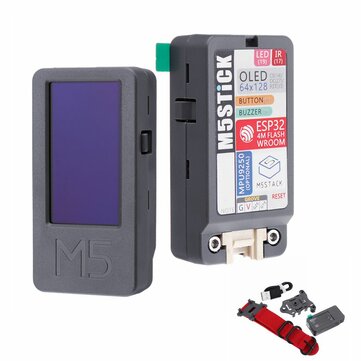 Added to that you get a small IR emitter, a buzzer, an integrated battery and several buttons:

The board is available on platformio.ini file with BLE & IR gateway and Button reading.

Currently the buzzer and the OLED are not used in this implementation, if someone wants to play with that and submit a Pull Request, I think there is some fun to have with this new board!

I’ve tried IRsend irsend(IR_EMITTER_PIN, true); to invert the LED control pin. This stops the LED being on all the time, but I’m not getting any LED transmission either. I see

in the serial console when sending the command over MQTT.

Mild success! If I pack hex and protocol_name, I.E. {"hex":"0xAD513CE51A09F607F800FF32CD26D900FF807F","protocol_name":"MITSUBISHI_HEAVY_152"} I get an infra-red LED blink! However my Mitsubishi heavy industries aircon is not responding to the signal. More investigation is required.

I tried to build exactly the same code in the arduino IDE on my laptop and the IRtoMQTT doesn’t work. I recompiled and flashed the code from my desktop and it works again. Something’s odd here… I loaded the same library bundle from the OpenMQTTGateway releases page for the M5stickC, I’m selecting the same board in the arduino IDE drop-down list.

I’ve switched to using an external IR LED on a GPIO pin, but I’m not getting any response from the aircon. The IR RX flashes when the IR TX transmits, and I can see the IR flash in a smartphone camera, but either the protocol is wrong or the IR LED isn’t powerful enough for the aircon to see. It’s much dimmer than the one built into the aircon remote. I might experiment with an amplified IR output.

could you indicate the version of OMG used?

By version I mean v0.9.3 for example or a previous one?

Sorry, I didn’t understood that it was an sha

Did you try to put your emitter at less than one meter to your AC. The IR emitter power is quite weak.

Hi, you should find it there:

Could you detail what you are expecting behind this?

The esp32-m5stick-ble-partitions.bin should be able to read Xiaomi sensors

Hi @1technophile, I’m talking about Xiaomi clearglass sensor and Qingping Alarm Clock.
At the moment I have 3 gateway with last version v0.9.3 connected to Home Assistant but I can see only Mi-Flora.

ok I see, once we have corrected the issue with disconnection I will output a beta version.