First post here. I’ve created a new topic as my “symptoms” are somewhat different from the previous topics.

I’ve been running OMG on a nodemcuv2 with an RXB12 superhet for a while now. I originally needed to move the receiver data line to D1 and re-compile and it is now working perfectly.

I ordered a Sonoff RF Bridge. The board is labelled “433RFBRIGE R2 V1.0 2017 11 23” (not my mis-spelling in “433BRIGE”). I flashed 0.9.2 (the same as my nodemcuv2).
I uncommented #define ZgatewaySRFB “SRFB” in User_config.h
I uncommented #define ESPWifiManualSetup true and set my Wifi and Mosquitto credentials as per the other board.

I’ve moved the slide switch back to the “S2” position.

It appears on my network, connects to Mosquitto and publishes under OpenMQTTGateway_SRFB/LWT, version and SYStoMQTT and displays the usual “uptime” payload and lists modules as “SRFBHADiscovery” - (this despite //#define ZmqttDiscovery “HADiscovery” being commented. On my other board I needed to explicitly #undef ZmqttDiscovery to prevent discovery in HA but that’s a different issue).

Despite various warnings in the HA logs about “Unable to parse JSON…” it has created the two sensors in - HA OpenMQTTGateway_SRFB and gatewaySRFB.

I can see output over the serial port.

However, it is not reacting to any 433MHz activity at all and neither the WIFI_LED nor RF_LED light up.

I haven’t done much reading on the Sonoff hardware as I assumed that it was just an ESP_ with 433MHz rx and tx much like my other board but it seems that may not be the case.

I presume that the mapping from the rx output to the ESP gpio is set correctly in the code? Sonoff hasn’t changed it in later boards?

At this stage, I’m inclined to think that the hardware is faulty since everything else looks to be working correctly (and since the nodemcuv2 is correctly decoding the 433MHz data.)

Any suggestions will be gratefully received.

Update:
I downloaded the schematic for the (R1 version of) the RF Bridge and noticed the EFM8 between the rx and the ESP. Did a bit more reading and things are a lot clearer.

I was testing with a ceiling fan controller which is correctly decoded by the nodemcuv2 but is ignored by the Sonoff. So, I tried a PIR sensor which I recently bought and it is recognised by both the Sonoff and the nodemcuv2. So it is actually working.

It doesn’t recognise my doorbell (or perhaps the receiver sensitivity is lower than my other device - it’s not especially close?) but it decodes a remote power point controller which is ignored by the nodemcuv2.

So until I get a chance to do some more reading, it looks like the EFM8BB is decoding the data from the SYN470R and only recognises some codes/protocols. There is a header on the board which makes the 2 wire bus available, so it looks like the designers intended to allow for the EFM8 to be flashed as well as the ESP. Not sure if anyone has gone down this path?

Anyway, I can work with this now I know (at least some of ) what’s going on.

So until I get a chance to do some more reading, it looks like the EFM8BB is decoding the data from the SYN470R and only recognises some codes/protocols. There is a header on the board which makes the 2 wire bus available, so it looks like the designers intended to allow for the EFM8 to be flashed as well as the ESP. Not sure if anyone has gone down this path?

The EFM8 can be flashed or you could bypass it to use the esp8255 as a decoder (and get the same possibilities as the nodemcu).

Here is some infos : 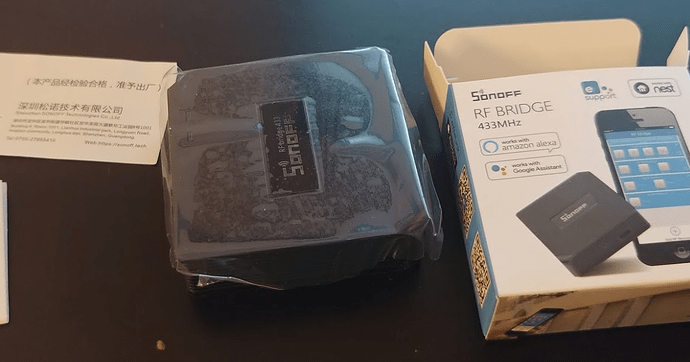 SONOFF RF BRIDGE + Pilight or How to extend the supported protocols by our...

With version V0.9 of OpenMQTTGateway  @steadramon  &  @puuu  (the ESP library creator) enabled by their work to integrate Pilight library on...

Hi,
Thanks for the link. Interesting information.

I’ve done some more testing since yesterday and I’ve found that the native Sonoff decodes some devices that rc-switch ignores and vice versa. I have a remote with 10 buttons which seemed to be not very useful but the Sonoff decodes it successfully, so it’s become very useful.

I think I’m inclined to leave it as is for the time being as I’m covering most of my bases.

Thank you very much for all your hard work with the excellent software.